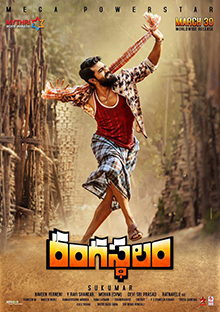 Director: SukumarWriter: Sukumar, Srinivas Rongali, Buchi Babu SanaStars: Ram Charan, Samantha Akkineni, AadhiSummary: The film is set in 1980's rural India. Chittibabu, a pure and innocent guy with partial deafness, earns his livelihood by supplying water to agricultural lands in the fictional village of Rangasthalam. The crux of the story forms when his brother decides to contest against the President who had been ruling the village for 30 years by usurping the lands of the innocent villagers. Chittibabu, on the other hand, is only concerned for his brother's safety and will go to great lengths to safeguard his life. —Ritchie Sudarshan